Today was one of those Saturdays when you just wanted to curl up on the couch, watch TV, order Chinese food and eat it from the box. So I shared these thoughts with my husband, hoping he would get Chinese food takeout. He didn’t. He did even better. He called the kids and they made General Tso’s chicken  ♥

From where I was sitting, I could hear him giving instructions to our kids, Justin (14) and Sophia (5). He made the batter and Justin fried the chicken while Sophia was whipping up the sauce. When everything was ready, my husband (who’s a genius in the kitchen) fired up the wok and started cooking. I could smell the delicious aroma wafting from the kitchen and could not wait to taste their creation. After a few minutes, they called me. Dinner’s ready! 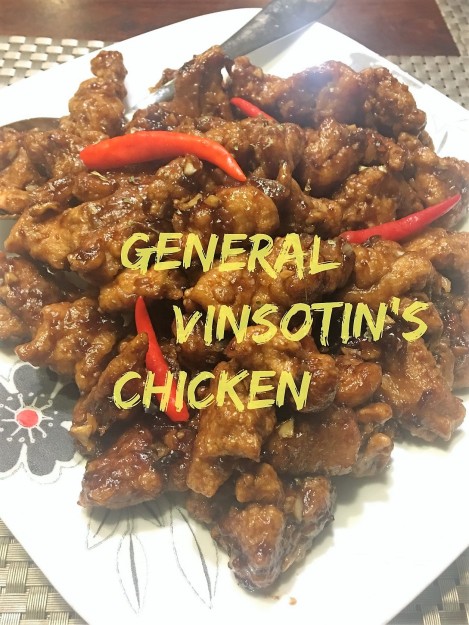 I officially renamed this dish “General VinSoTin’s Chicken”, after my husband Vinz, Justin and Sophia. The chicken was juicy and moist, perfectly battered and stir-fried in a sauce that’s deliciously sweet and flavorful. We just added the Thai chili peppers as a finishing touch so it’s not really spicy, perfect for our 5 year old. My husband said he got the recipe from watching this video. I looked up the chef’s blog  and here’s a link to the written recipe, thanks Chef Katie! We did not have the traditional broccoli that goes with it but it paired very well with the Sauteed Bottle Gourd (Ginisang Upo) that my husband also made. Special thanks to our friends Paulo and Myra for the bottle gourd (which was half as big as Sophia) from their “farm”. Oh and by the way, I just learned today that upo is bottle gourd in English. Did you notice I already used it three times? So much fancier than upo 🙂 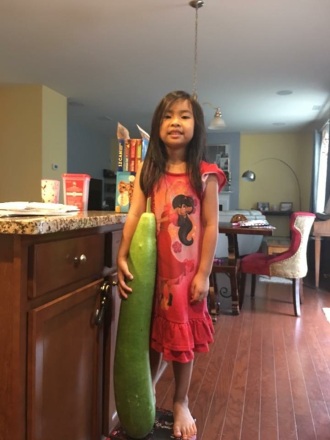 So today I got to curl up on the couch and watch movies. I did not get to eat out of a Chinese takeout box, but I got something even way better. Freshly cooked General VinSoTin’s chicken guaranteed to have no MSG and made with a lot of love ♥

And if General Tso was a Filipino, he would be extremely proud of himself 🙂

2 thoughts on “If General Tso was a Filipino…”

So Glad You Found Me!